Pilates was designed by Joseph Pilates, a physical-culturist born in Germany in 1880. He developed a system of exercises during the first half of the 20th century which were intended to strengthen the human mind and body. Joseph Pilates believed that mental and physical health are inter-related.*

He had practiced many of the physical training regimes which were available in Germany in his youth, and it was out of this context that he developed his own work, which has clear connections with the physical culture of the late ninteenth century such as the use of specially invented apparatuses and the claim that the exercises could cure illness.*

The first generation of students, many of them dancers, who studied with Joseph Pilates and went on to open studios and teach the method are collectively known as The Elders. Modern day pilates styles, both “traditional” and “contemporary”, are derived from the teaching of these first generation students.

The method was originally confined to the few and normally practiced in a specialized studio, but with time this has changed and pilates can now be found in community centers, gyms, dance studios, and in physical therapy offices.

A rare video of Joseph Pilates teaching his method 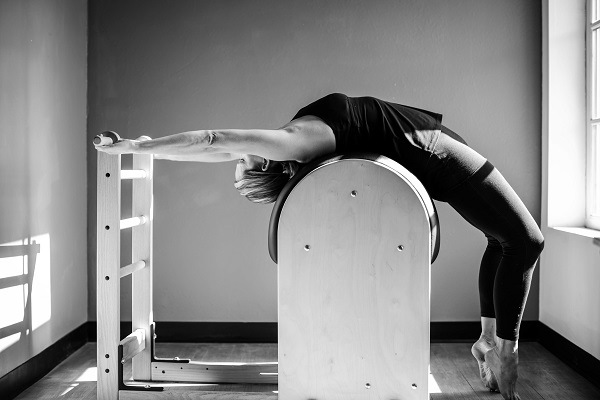 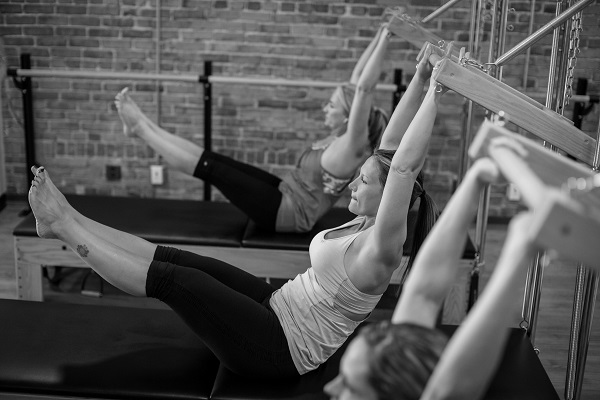 The Pilates method seeks to develop controlled movement from a strong core and it does this using a range of apparatuses to guide and train the body. Joe Pilates originally developed his method as mat exercises but, in common with many other physical culture systems from the first part of the twentieth century, he used several pieces of apparatus to help people “get the method in their bodies”. Each piece of apparatus has its own repertoire of exercises and most of the exercises done on the various pieces of Pilates apparatus are resistance training since they make use of springs to provide additional resistance. Using springs results in “progressive resistance”, meaning the resistance increases as the spring is stretched.

The most widely used piece of apparatus, and probably the most important, is the Reformer, but other apparatus used in a traditional Pilates studio include the Cadillac (also called the Trapeze Table), the high (or electric) chair, the Wunda Chair, the baby Chair, and the Ladder Barrel, the Spine Corrector (Step Barrel) and small barrel. Lesser used apparati include the Magic Circle, Guillotine Tower, the Pedi-Pole, and the Foot Corrector.

In contemporary Pilates other props are used, including small weighted balls, foam rollers, large exercise balls, rotating disks, and resistance bands. Some of the traditional apparatuses have been adapted for use in contemporary pilates (e.g. splitting the pedal on the wunda chair). 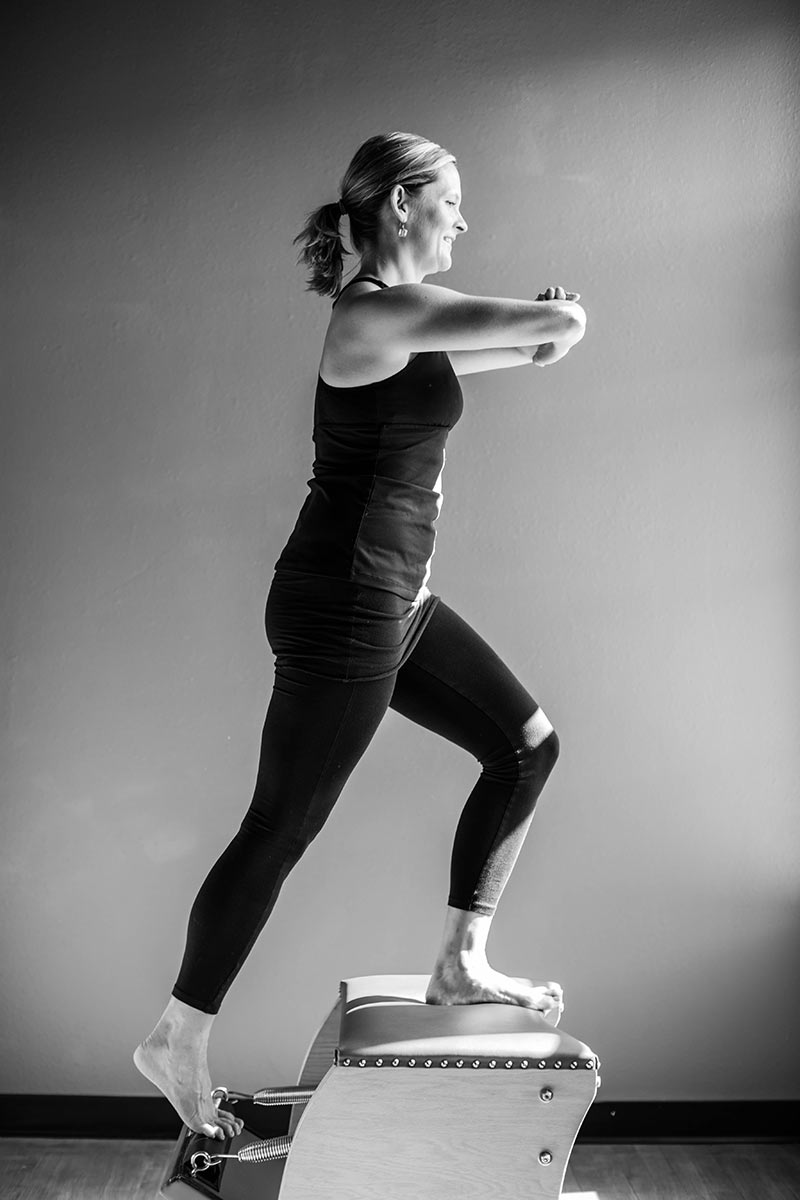 One-on-one session on the mat and Pilates equipment designed to meet the needs and goals of the individual. We utilize all of the studio equipment in these sessions including the Reformer, Cadillac/Tower, Wunda chair, spine corrector and ladder barrels as well as the pedal pull and other Pilates props. You will learn and work on the classical Pilates exercises and system with an individual and personal approach.

One Instructor for two or more students on the mat and Pilates equipment. It is recommended that students are similar fitness levels. Grab a friend and come in for an intro class together or come in for a buy 1 get 1 free Private intro session so we can see if we can match you up with some one else.

These classes are 6 week introductory classes meet once per week and are limited to four students on the reformer. In addition to the reformer you will work on Mat and Tower work. Experience a unique approach to physical conditioning utilizing all of the muscles of the body.

These classes offer a full body core centered workout that will help you learn the classical order that Joe Pilates invented! So you can practice it anywhere you go. Mats and appropriate Pilates props are provided.

I grew up in the foothills of the majestic Mount Rainier and began dancing ballet at a young age. In 2005, I moved to Missoula to pursue a BFA in dance teaching, choreography, and performance at The University of Montana. I fell in love with MT, then a Montana boy, and I have lived in Missoula since. Upon earning my degree, I began teaching dance in a variety of settings- UM, public schools, and private dance studios. I met Kirsten Cherubini while performing together in Bare Bait Dance (directed by Joy French) and became interested in trying Pilates as a cross-training method. Little did I know that I would find so much in the Pilates movement system- injury prevention, strength, a feeling of centering and wholeness, and so much joy. While I immediately noticed the impact of Pilates on my dancing and teaching, it wasn’t until the birth of my son that I realized how beneficial Pilates is for my everyday functional movement. When the opportunity arose to become a certified Pilates instructor, I jumped at the chance and completed my Level I Comprehensive Peak Pilates Certification in March 2020. I am currently pursuing my Level II Certification and am scheduled to complete my hours and assessments in February 2021. To me, Pilates is a gift; it empowers me to be a more functional mover, better teacher, and more balanced human. I love that this movement system is for everybody and every BODY- for athletes and dancers, grandparents and teenagers, and every level of fitness.

I was born and raised in South Dakota and moved to Missoula in 2009 to study dance at the University of Montana. In 2013 I graduated from the U of M with a BFA in dance, emphasis in Choreography & Performance. Thanks to Mari Winsor’s DVD’s, I discovered Pilates when I was a teen as a way to cross-train alongside my dance education. Years later I found the benefits of training in the studio and on equipment with Kirsten at Main St. Pilates. After having two boys I found myself craving the connection and health benefits that the Pilates movement system has to offer. I wanted to learn more, and in the spring of 2020 I became certified in Level 1 Peak Pilates. I love that this work is for every body and all abilities. When I’m not teaching (online or in the studio), I can be found hiking in the mountains with my black labs, out on the rivers with my husband, or exploring everything and anything with my two young boys. 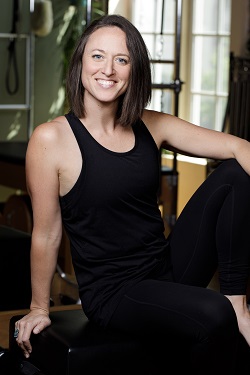 I am a dancer, choreographer, videographer and producer…and now Pilates instructor! After earning my MFA in Performance and Choreography at the University of Colorado Boulder, I moved to Missoula, MT and in 2011 founded Bare Bait Dance, a professional contemporary dance company.

During this time, I stumbled into Pilates as a way to cross-train and learn more about both daily functional use of the body and more supported range in dance. I studied with Kirsten and Kelly at Main St. Pilates Studio for years before diving into my first Peak Certified Training program in the fall of 2018.

Continuing my education with Peak, I’ve discovered beautiful crossover potential between dance education and pilates training. But even more than that, I continue to love sharing my body knowledge within this new modality for all movers and shakers, not just dancers! I know for myself, the more consistent I am with training, the more injury-free, energized, and confident I feel in my body. I hope to share that with MSPS clients! 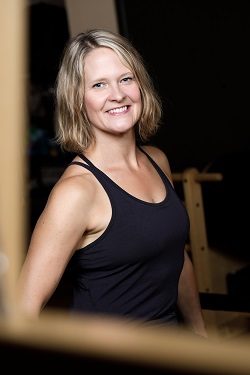 I grew up here in Missoula and graduated from the University of MT with a BFA in Dance with a teaching emphasis and choreography/performance emphasis. Upon graduating I moved to Chicago to explore the professional dance world. Suffering a knee injury and surgery led me to Pilates for strengthening and rehab. I fell in love with Pilates movement system and completed my first certification in Chicago in 2002 through the Physicalmind Institute.

In 2004 Breanne Ender and I opened Main Street Pilates studio and in 2007 I completed my second Pilates Certification through Peak Pilates. I love that Pilates can be taught anyone at any age and any ability. Through teaching and practicing Pilates I have experienced the power that it can have on a persons overall well being both physically and mentally. That is what motivates me to teach this method of movement. Pilates also aids me in my daily life as a Mom of an active seven year old .

My newest certification, favorite work out and addition to my teaching repertoire is Tracey Mallette’s Booty Barre Method. In January 2017 I taught Pilates abroad for the first time in Los Cabos, Mexico. In 2017 I completed a year study with 2nd generation Pilates instructor Chris Robinson who has studied directly under Romana and Jay Grimes. 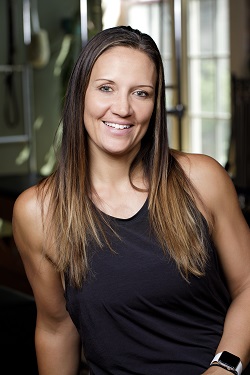 As a fitness enthusiast, I have always been attracted to ways to make my body stronger. I discovered Pilates when I was training for my first marathon and immediately recognized the benefits of the classical work inspired by Joseph Pilates. My love for the work and my new found strength inspired me to become a Pilates instructor through Peak Pilates in 2006.

I am fully certified in matwork, reformer, cadillac, chair and barrels. I am inspired by the life changing habits I see from my Pilates clients. In my spare time, I enjoy running, skiing, paddleboarding and chasing my two amazing little boys. I have been teaching Booty Barre since completing certification in the Fall of 2012 and have recently incorporated Booty Barre Sculpt repertoire in to my classes after attending a workshop with Tracey Mallett this past Fall. In 2017 I completed year teacher intensive with Chris Robinson of S6 Fitness in San Diego in an in depth study of the classical Pilates work. 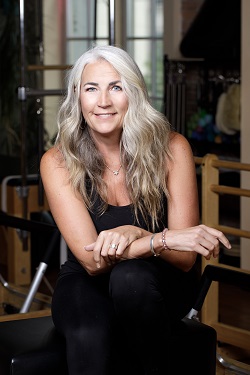 I was born and raised in Missoula, and had the opportunity to live in both Seattle and Boise for over ten years. As we often hear from those who have moved away and then made our way back, “my heart was always in Montana.” My husband and I have two wonderful boys and when it was time for them to begin school we decided to make Missoula our home. We are so lucky to be able to; water ski, snow ski, hike, bike and run in MT’s great outdoors. After many years of running as my favorite exercise, and experiencing it’s associated injuries, I discovered Pilates. I have been actively practicing and seeing it’s positive results for over 8 years.

I am active in the community selling real estate, and participating in many types of fund raising projects. My boys have finished high college and moved onto their careers. So when the opportunity was presented to me to become a certified Pilates instructor, I jumped at the chance. Knowing what it has helped me achieve, and helping others do the same is a wonderful challenge. The opportunity to help others become stronger both physically and mentally was exactly what I was looking for! I have been teaching since 2012 and love every minute of it. In the spring of 2013 I became a certified Booty Barre instructor.